It doesn’t feel like too long ago that we were celebrating the spectacular wedding of Prince Harry and Meghan Markle at Windsor Castle — which drew in millions of viewers and gathered people from around the world to a small town just west of London.

Last Friday, we revisited the same location to see Princess Eugenie wed her sweetheart of eight years, Jack Brooksbank. Although the wedding didn’t capture the same attention of Prince Harry’s, who is sixth in line to the throne, ITV reported that there were around three million viewers who tuned in to watch the ceremony unfold.

As a company who holds a Royal Warrant, there’s no one better than us to give you a royal-rundown of what happened on the day so that you can relive every single moment.

The happy couple invited 850 guests to St George’s Chapel for the ceremony, and they appeared to arrive between 8:30am and 11:00am. Just like the Duke and Duchess of Sussex — who are now expecting their first child together — Princess Eugenie and Jack allowed 1,200 members of the public to join them in the grounds of Windsor Castle to celebrate the day; all of whom were selected through ballot proceedings.

However, crowds weren’t just limited to the castle itself. An additional 3,000 people reportedly gathered in the streets of Windsor to catch a glimpse of the royals in action.

The event wasn’t short of a few famous faces either. Public figures such as Naomi Campbell, Kate Moss, Ricky Martin, Stephen Fry and Robbie Williams were all in attendance. Did you know that the former Take That star and current X-Factor judges’ daughter, Theodora, was a flower girl for the wedded couple? Not only that, she asked the Duchess of York if she was the Queen!

Members of the Royal Family were last to arrive and started making their way into the chapel at around 10:40am. This included the Prince of Wales, Duke and Duchess of Cambridge, Duke and Duchess of Sussex and of course, the Queen and her husband, the Duke of Edinburgh.

Mother of the Bride Sarah, Duchess of York, and her daughter, Princess Beatrice, who was Maid of Honour, later arrived at the venue and made an effort to interact with crowds before entering the chapel. Following this, Bridegroom Jack Brooksbank and his brother, Best Man Thomas Brooksbank, were seen entering.

Princess Eugenie and her father, the Duke of York, were last to arrive and entered through the West Steps of St George’s Chapel. Guests caught their first glimpse of Eugenie’s wedding dress which was designed by Peter Pilotto and Christopher De Vos as she walked down the aisle.

Keeping in line with tradition, Eugenie wore a white portrait-neckline gown with a wide train. However, the princess broke convention when she decided not to wear a veil and instead take pride in her back scars which were left from surgery when treating scoliosis at age 12. For the ceremony, the Queen loaned Princess Eugenie the Grenville emerald tiara which belonged to the Queen Mother before her death.

Jack Brooksbank watched in awe as his soon-to-be wife made her way down the aisle in a radiant dress that stunned the world. You may not have spotted this, but Jack was wearing his spectacles as Eugenie headed to the alter — making sure he had clear vision and didn’t miss a moment of the most important day of his life; he later removed them for the rest of the ceremony.

Lead by Dean of Windsor, the Right Reverend David Corner, and the Archbishop of York, the Most Reverend and Right Honourable John Sentamu, the ceremony lasted around an hour. This included hymns, prayers as well as speeches from the likes of the Princess Beatrice, who read from The Great Gatsby and of course the exchange of vows and rings.

After the ceremony ended, the newly married couple exited the chapel as husband and wife and showed a kiss on the West Steps. As they departed for carriage procession, page boys and flower girls, which included Prince George and Princess Charlotte, also made an appearance.

The wedded couple then took a short carriage ride in the Scottish State Coach which was pulled by four Windsor Grey horses named Plymouth, Milford Haven, Tyrone and Storm. There were two outriders also, Claudia and Sir Basil!

To begin the celebrations, the Queen’s reception luncheon was held at St George’s Hall at around 1:00pm but was not televised. At around 7:00pm, after the midday reception, guests partied at Royal Lodge in Windsor until the early hours of the morning. The location was decorated with an autumnal theme with fall-inspired flower arrangements to create a loved-up atmosphere for everyone to enjoy.

Princess Eugenie wore a long sleeve, silk gown designed by Zac Posen which included its own built-in cape. The bride and groom commented in a statement: “Mr. Posen was inspired by the beauty of Windsor and the surrounding countryside. The choice of colour reflects the blush of an English rose. Mr. Posen took his inspiration from the White Rose of York. The pin-tucked plissé is cut on the bias and mixed with signature drapes. The White Rose of York is subtlety embroidered on both the shoulder and back which hold together the cape. The silk for the gown comes from the British Mill, Biddle Sawyer Silk.”

However, the party did not end on Friday night or the early hours of Saturday morning. The couple were more than happy to let guests celebrate for a second day and opened their own fun fair on the grounds!

That was our round-up of Princess Eugenie’s and Jack Brooksbanks wedding. But before you go, make sure to browse our range of women’s, men’s, children’s, designer, and sport umbrellas!

Halloween is definitely growing in popularity for families across the UK. But with sweets, treats, costumes and activities to pay for, the event can prove costly for some of us!

So, how do you make sure your family has a fun and memorable Halloween without breaking the bank? Instead of buying new things online, repurpose clothes and accessories from around your home. Not only will you save money, but this is also a great crafts activity you can enjoy with the kids… 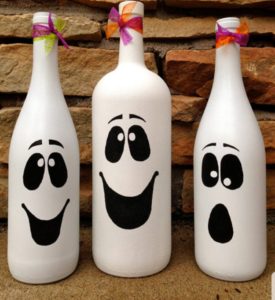 If you’re having a party, you need to deck out the house appropriately. Instead of forking out cash for decorations, make your own! Start with ‘mini ghosts’. Simply keep hold of your drinking bottles instead of recycling them and spray paint these white. Once dry, draw ghost eyes and mouths on each with black marker pens and place them around your home. 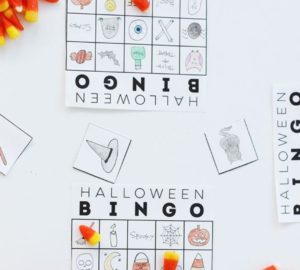 There are plenty of games to buy online, but if you want to get creative, do your own. One great idea is ‘Scary Bingo’ — just like the regular game, but you use spooky images instead of numbers.

Get several pieces of paper — enough for everyone at the party — and mark out a grid of four-by-four squares. In each, draw a picture of a Halloween image — like a witch, spider, black cat, pumpkin, ghost, and monster. Kids can then use pennies to mark off when each image is called out — make sure there’s a prize at the end for the first full ‘haunted’ house! 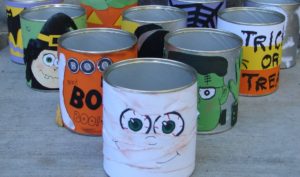 Another easy game to create at home before a party, the ‘Halloween Can Game’ is great fun for kids. To start, keep your used cans of soup, baked beans and other food. Remove the labels and paint faces of ghosts, witches and pumpkins.

Then, make a mummy-themed papier-mâché ball by using black felt-tip pen and paint to mark out bandages and two yellow eyeballs. Once dry, create a tower and let the kids use the mummy ball to knock down the tins. (You can also use papier-mâché to make a Halloween-themed piñata filled with sweet treats!) 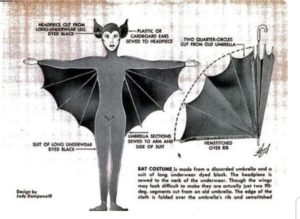 Of course, kids love dressing up for Halloween. So, why not make them the perfect bat costume out of a simple umbrella? All you need are:

Firstly, open the umbrella upside down on a workbench. Take your scissors and cut two triangles of material opposite each other — make sure one of the triangles is a bit smaller than the other. This is for recognising the top and bottom of the wings.

Use your wire cutters to cut the metal supports — for safety, take off as much metal as you can to eliminate sharp edges. Then, cut the metal handle off the umbrella before cutting the joiner from all the umbrella arms. Next, remove the support arms from either side of the larger triangle of your bat wings — this lets your youngster move their arms!

Now, tape down the other loose support arms — making sure to cover sharp edges. From here, measure and cut two pieces of ribbon. How long? Just enough to tie the wings to your child’s wrists. Afterwards, cut two longer pieces of ribbon — these must go across their shoulders and chest, as well as under their arms, and tie together at the back. Next, attach the ribbon to top of the wings.

And you’re done! Now all you need is a headband with black, pointed ears and plain black top and trousers. 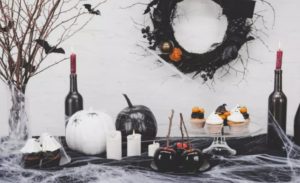 Throwing a dinner party to celebrate the event? Then you need Halloween treats that can sit on the table. To start, you can use plastic vampire teeth as napkin rings, then add to the effect by putting red food colouring on the white cloth.

For a centrepiece, take a glass vase you already own and fill it with spare Halloween pieces the kids have left over from across the years — like plastic spiders. Pull apart cotton wool balls to create a cobweb-like effect. Then, sprinkle some discoloured, browning leaves from the garden over the top for the ideal Halloween-themed centrepiece.

Cut the cost of Halloween with these repurposing craft tips for Halloween 2018! Browse our ranges of men’s, women’s, kids’, sports and designer umbrellas before you get to work!