In the UK, we spend around ten million pounds on umbrellas every year. But with the typical British weather pattern, the accessory is almost a necessity if you want to stay dry, warm and protected.

Although the umbrella, or brolly, is a commonly used item today, that has not always been the case. At one time, only the most high-ranking of civilians used an umbrella — and even then, it was not for rain protection. So, where does the brolly come from? How was it used? And in which ways has it transformed to become the accessory we use so much today? Read about the evolution of the umbrella here…

The world ‘umbrella’ comes from the Latin word for shade — umbra — and at first, nobody used them for rain protection. Apart from scant evidence to the contrary found in China, the use of the umbrella as we know it today was solely to safeguard humans from the sun — a product we’d call a parasol today. In fact, the term parasol is derived from the Spanish words for stop (para) and sun (sol).

Although some believe that umbrellas were used in China as far back as 2,000BC, most claim that it was around 400BC that the design became a widely used accessory. The ancient Greeks, Romans, Chinese, Egyptians, and civilizations in India and the Middle East all reportedly used the umbrella as a parasol, and sculptures have even been found depicting the use of umbrellas in various locations across Egypt around this time. Most commonly, parasols were mainly used by high-ranking women, members of the clergy, and other powerful public figures. Unlike today, it was a clear symbol of rank and superiority.

With regard to its design, many predict that the umbrella (i.e. the canopy) was influenced by large trees due to its original use as a shading implement. Early umbrellas and parasols were often made from leaves, feathers and branches — but interestingly, the overall form appears very similar to modern designs.

After several centuries, the umbrella began to spread across the connected world. Some even think that it was in 1066 that the Normans brought the umbrella to England. However, nobody has found a way to prove this yet, and others claim that it was King Charles II’s wife, the Portuguese Catherine of Braganza, who introduced the country to the brolly in the mid-1600s.

But when did we start using the umbrella for rain protection? Most people place the date that we started using the umbrella to keep us dry in the 1600s, and according to accounts, English society — along with France and Italy — pioneered the trend!

During this time, most umbrellas were made from silk and didn’t offer much in the way of water resistance. However, apart from the difference in fabric and the fact that only privileged people owned one, the outline of the 17th-century umbrella mirrors what we see today. Thankfully, by the very end of this century, designers were beginning to hone waterproofing techniques…

A rising trend in sociable coffee houses and the need to shelter people as they walked from venues to their carriages added pressure on the umbrella industry.

For the first half of the 1700s, umbrellas remained strictly a female accessory, although, they grew rapidly in popularity. Around 1750, a gentleman named Jonas Hanway took it upon himself to launch a trend in men’s umbrellas, protecting himself with a rain umbrella as he traversed the streets of London. He put up with intense ridicule for his daring style at first, but eventually, men came around and the trend took off. By the turn of the 19th century, the rain umbrella became a common accessory for both men and women. It was also during this era that the term ‘Hanway’ was used as another name for an umbrella!

What were 18th-century brollies made from? We’ve already noticed that the general form and canopy shape appear unchanged from today’s designs, however, the materials used to construct them certainly have. Throughout the 1700s, umbrellas were created from whalebone mounted atop a long stick and then covered in a heavy cotton fabric doused in oil or wax to ensure a more waterproof product. It would take a few more years yet before improved fabrics and materials would be used in umbrella construction.

Once umbrellas established themselves as a genderless accessory, we started to see a divide in their construction. Men’s umbrellas were generally far heavier and weighed around four pounds, while women’s brollies were still often made using silk materials and to a smaller size. Although there was an option to have your umbrella made from split cane rather than whale bone, this made the product cheaper and lower in quality. Positively, this helped more people afford the once-luxury accessory.

The umbrellas of the Victorian Era were sometimes made from wood — which were hard to fold — until the 1850s, when Samuel Fox created the steel-ribbed brolly.

By the early 20th century, ladies from privileged backgrounds began to lose interest in using parasols as a fashion piece. Eventually, these disappeared from fashion around the 1930s, as more women became inclined to favour a tanned, glowing complexion.

In 1928, Hans Haupt pocket umbrellas came on the scene and the foldable umbrella market took off in Europe!

From the bones and feathers of the past to the treated nylon and fibreglass of today, umbrellas have had an interesting transformation over thousands of years.

Now, we’ve returned to treating the umbrella — both men’s and women’s — as both a fashion accessory and a weather-resistant necessity — from patio umbrellas large enough to protect a garden table, to compact brollies we can fit perfectly in our handbags. Today, you can find aerodynamic canopies designed to withstand intense rain and wind without turning inside out — a major bugbear of the brolly user — as well as tech umbrellas enhanced with gadgets, like GPS, Wi-Fi and Bluetooth! With a wide array of sizes and shapes in a spectrum of colours and designs, the question is: what’s next for the brolly?

Browse our selection of designer, children’s and sports umbrellas before you go

Looking to buy a new umbrella and want to treat yourself to something special? At Fulton Umbrellas, we have a wide range of beautiful umbrellas from the world’s best fashion designers.

Featuring a range of colours, images and patterns; browse our list of the top seven designer umbrellas to find the perfect accessory for you…

Orla Kiely is one of our favourite designers. Starting off her career by designing hats before moving onto bags, homeware and, of course, umbrellas; this Irish fashion designer has created incredible styles over the years.

We love this Kensington-2 Rhododendron Graphite designer umbrella by Orla Kiely for its monochromatic aesthetic. The dark grey shading contrasts interestingly with the floral pattern, making this design ideal if you want something understated but quirky. 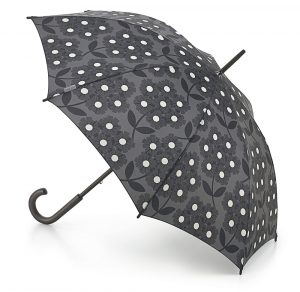 Opening her first store in 1994, Cath Kidston launched just under 140 outlets in under three years, both in the UK and overseas.

As she’s most famous for her floral patterns, we’ve chosen this Cath Kidston design to feature in our list. If there’s a motif that rivals floral in popularity, many people would say it’s polka dot — which is why we love how Cath Kidston combines these two opposing patterns in the Kingswood Rose designer umbrella. 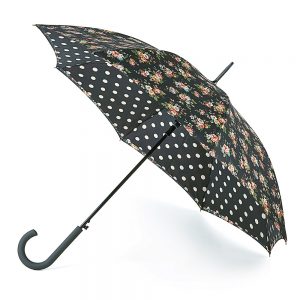 Appointed an OBE for her services to fashion and born Lucinda Jane Guinness, Lulu Guinness is a leading British fashion designer who specialises in accessories.

The bright motifs on a plain black canopy gives this design an ideal balance of colour — perfect if you’re planning on taking the accessory to work and formal events! What’s more, the special star-shaped design makes this umbrella stand out against the rest, while the lip outline is a signature emblem for Lulu Guinness. All in all, the Rainbow Lips umbrella is worth the investment if you enjoy this designer’s range. 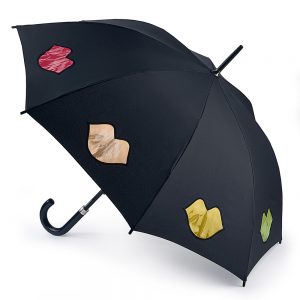 4. The National Gallery: Thames Below Westminster

Founded in 1824, the National Gallery in Trafalgar Square is one of the most visited art museums in the world and is home to more than 2,000 paintings dating from the mid-1200s to around 1900.

An emblem of British culture, this National Gallery Thames Below Westminster design offers a creative view of an iconic London scene. With Big Ben towering across the canopy and a palette of sepia-style colours, this umbrella offers a beautiful watercolour effect that perfectly complements rainy weather! 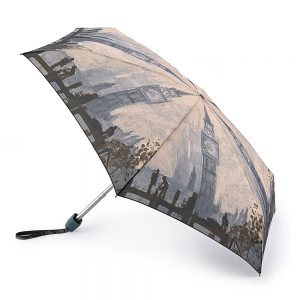 In third place, we have another entry form Lulu Guinness. The amazing contrast of bold colours infuses this umbrella with an eye-catching appeal that makes it just as much a fashion statement as a necessity!

Featuring a bright red outer canopy with black and white bands underneath, the Bloomsbury Diagonal Stripe design offers a mesmerizing appearance that looks elegant and contemporary for fashion-forward ladies. We recommend matching it with red boots and a black coat for a complementary, flawless look! 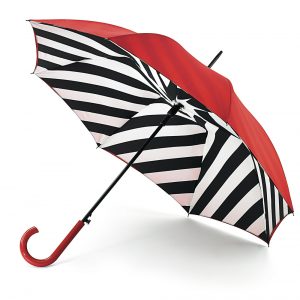 Cath Kidston is famous for her children-inspired fashion pieces. The designer loves using fun motifs, such as polka dots and flowers, in her products, which makes them perfect for youngsters.

We particularly like this Cath Kidston Dino Stamp umbrella and think it’s a great purchase for youngsters who love being outside whatever the weather. Whether you’re sending them off to school on a rainy day, or heading out to the park when there’s drizzle in the air, kids will love the multicoloured dinosaur pattern — which features the brachiosaurus, stegosaurus, triceratops, and tyrannosaurus. Even better, this umbrella’s canopy is clear to help highlight the colour and shape of the creatures!

Young boys and girls look especially adorable when you team this dinosaur-themed design with a bright pair of wellington boots! 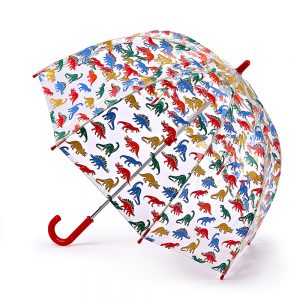 There’s so much we love about this umbrella from Lulu Guinness. The fabulously fashionable dome shape is not only very on-trend, but the gorgeous imagery and clever birdcage effect make this design unforgettable.

Often, the issue with dome umbrellas is that sometimes the user doesn’t have as much visibility as with other designs. Getting around this usually means making the canopy transparent, and therefore less interesting. However, the Lulu Guinness Lovebirds umbrella gives you a beautiful and distinctive design while providing excellent visibility. 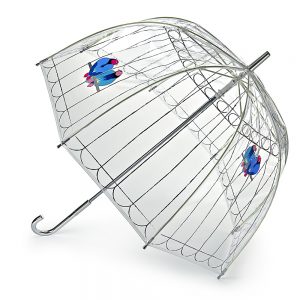 We hope you’ve found something you love from our top-seven list of designer umbrellas. Browse our other men’s, women’s, children’s, and sports options for more choice.