The considerations involved in planning a wedding will seem endless for couples as they work through everything from choosing a venue to deciding on their menus and picking wedding favours. With so much to do, it’s almost inevitable that sometimes, small details can be forgotten — but as long as these details don’t involve forgetting the rings, then you should be fine! Join us and take a look at some of the key things to remember at weddings.

Have a ‘point of contact’ person
On the big day, you’ll be overcome with emotion and from the getting ready routine to arriving at the venue, it’s likely that the bride and groom will be hard to reach. It’s not likely that couples will be spending time on their phones trying to make sure that everyone is in the right place at the right time, so it can prove useful to assign one of your attendees with the job of keeping guests informed of the goings on ahead of the ceremony. Having a handful of questions pop up simultaneously can be overwhelming, and the couple will already have plenty on their minds before they exchange their vows. Ask a family member or friend to act as a point of contact for guests or even a call recipient from suppliers or caterers, as this can feel like one less worry on a day that you’ll want to enjoy every single minute of!

Don’t get caught out by a downpour
One of the big concerns for both couples and their guests attending their big day is the weather, as we all know that in the UK, you just don’t know what you might have to endure. You could be sweltering in late September looking for shade at any opportunity or shivering in a marquee on a day in mid-July. If you’ve already checked the forecast and it isn’t looking promising, then it could be an idea to place a compact umbrella beneath the aisles in your venue. These could prevent the day from getting rained off, as many couples are drawn towards outdoor ceremonies rather than the traditional church setting — and your guests will certainly be grateful! If you’re a bride worried about getting soaked as soon as you step out of the wedding car, the consider a clear umbrella from Fulton’s collection. Our products are engineered with additional flexibility and reinforced ribs to help withstand wind. Your guests will still be able to see you, but if it’s a rainy, windy morning then you’ll manage to keep your hair and makeup sheltered from the elements.

Fend off the shivers
As mentioned, not everyone is inclined to keep their wedding inside, as a natural setting can often make for a great summer party feel to your wedding, as well as providing some lovely photograph opportunities. However, you might want to take into account that even if you are fortunate enough to enjoy a sunny wedding day, once the evening draws in the temperature is bound to take a fall. This can make guests wish that they’d brought that extra layer they were debating, as they try to combat their shivers by dancing — or by visiting the bar more often! A smart choice to keep your nearest and dearest warm is by dotting some blankets around your venue for guests to pick up when necessary.

Provide a spare seat or two
You’ll probably be spending a day or two in your venue making sure that everything looks perfect ahead of your big day, paying attention to the smallest of details and being precise with the quantities of things that you’ll require. It’s always good to have a little too much than a little too less though, be on the safe side and make sure that your guests’ plus ones are accounted for by providing a few extra seats if you are holding your ceremony somewhere other than a church with pews. You won’t want to be having people rushing around in the minutes before you walk down the aisle, so have a few additional spaces free to guarantee that your ceremony runs seamlessly.

It’s easy to get bogged down with wedding planning, so keep these all-important things in mind and worry less and enjoy yourself on your special day! 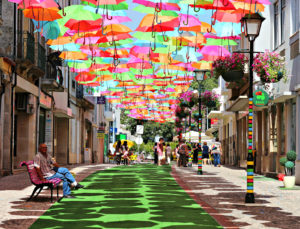 While we often forget our umbrellas when we need them the most, they can also come in handy for a range of unsuspecting purposes. Umbrellas are versatile, and you could get more use out of your trusty rain shelter than you first thought with some handy tips in this guide. Let’s take a look at some clever brolly innovations!

Art installations
Back in 2017, the Coppergate Shopping Centre in York gave shoppers shelter from the rain beneath an array of suspended umbrellas, a vibrant display which made visitors smile come rain or come shine. It was a slightly tongue-in-cheek instalment, after the centre had previously fitted a beach area, complete with deckchairs and a sandpit, to celebrate a hot summer in the same year. However, the rain soon returned, and the success of the beach was short lived; so the street became a canvas for what was named the ‘Brollywalk’, and many passers-by stopped to admire the eclectic tribute to the classic British summer. In this way, umbrellas became a cheerful, artistic take on the impromptu-showers that we all know and love (when we’ve got an umbrella with us, of course!). Umbrellas come in a whole host of colours and prints, and they can make for quirky centerpieces or event decorations, so why not opt for something a bit different!

Sun shields
When the forecast heats up, us Brits all change into our summer wardrobes and leave the umbrella at home in favour of a trendy pair of sunglasses. However, consider packing your umbrella when the temperature hits double figures, as the intensity of the sun can require some shelter. An umbrella provides a portable escape from the sun and shade from the harsh rays. Take the Parasoleil UV Spotty Rose umbrella we’ve developed for example, with a UPF 50+ label, you’ll be protected from up to 99% of UV rays!

Kites
Did you know that you could make the perfect afternoon pastime from an old umbrella? With a bit of adjustment, an old umbrella could become a kite! Repurpose it by manipulating the wire frame or adding some wooden rods to create a kite shape. Then, use a ball of string and a makeshift handle to complete your invention, and enjoy the challenge of making it fly. Autumn and winter are the best seasons for trying this out, as it tends to be windier which makes for optimum kite flying conditions!

Fashion statements
Umbrellas come in a whole host of prints and colours, allowing people to express their individual styles in a unique way. Whether you keep it sleek and co-ordinate your prints or colours, or you choose to brave a bold contrast, an umbrella can make for a trendy addition to everyday attire. For some star-studded inspiration look at Lady Gaga’s recent Met Gala outfit choices, one of which included a black umbrella to match her extravagant dress. Her entourage of dancers also held umbrellas around her, making her appearance on the iconic Met Gala stairs an impressive spectacle.
So, which one will you try out? Remember, you don’t have to save your umbrella for a rainy day!

Last week saw another spectacular year of the RHS Chelsea Flower Show in London, where blossoms were blooming, and creativity was flowing across all the miraculous exhibitions on display. Hosted in the grounds of the Royal Hospital Chelsea, the home of retired British Army soldiers, the event brings in around 157,000 visitors each year and never fails to impress locals, tourists and of course – the Royals.

Last year we saw a plethora of emerging trends, but what made 2019 so special? Aside from the gleaming sun, where our UPF 50+ Parasoleil UV Spotty Rose would have certainly came in handy and will do in the coming summer months, protecting you from 99% of the sun’s UV rays, there is a lot to recap on!

The Duchess’ Debut
You may have seen some photographs circulating the media recently of the Cambridge’s pondering in a stunning garden. Did you know that this was designed specifically for the week-long extravaganza? With the help of Andrée Davies and Adam White, the Duchess of Cambridge co-designed the RHS Back to Nature Garden and was very hands on during the process. She even received some help from George, Charlotte and Louis!

As this was a Feature Garden, it wasn’t in with a chance of winning any awards. However, that didn’t matter as Prince George told his father, Prince William, that he would score the garden ’20 out of 10’ which is a huge complement from our future King!

Plant of the Year
You may be familiar with the Plant of the Year Award at the Chelsea Flower Show, and this year’s winner was very impressive. Out of 20 contenders, the Sedum Atlantis took first place. The award was announced in the Great Pavilion, where all 20 plants were on display.

But what makes the Sedum Atlantis so special? Well, it’s extremely low maintenance which is one bonus — meaning it never fails to look good. As a hardy stonecrop, the plant itself is drought tolerant and is easy to grow. From June to September, it forms 30cm high cushions of variegate foliage topped with yellow flowers. As well as this, they’re extremely attractive to pollinators!

For the second year running, Mark Gregroy copped the BBC People’s Choice Award for his Welcome to Yorkshire Garden. The display itself was his 99th garden and also won him a Gold medal and hosted some famous faces — including Dame Joan Collins and Dame Judi Dench. However, one of the best complements he received was from Hollywood A-Lister, Stanley Tucci, who described it as stepping into another world.

Gregory commented: “I want to thank everyone that voted for us, I couldn’t be happier. It’s such an honour to receive this accolade again and to have been able to share the place I call home with the world is a privilege. It seems that people love Yorkshire as much as I do!”

Everyone wants to win the Best Show Garden, there’s no doubt about it. However, judges called Andy Sturgeon’s M&G Garden ‘perfection’ when naming him this winner. The woodland landscape embodied a naturalistic sensation and lavish planting definitely impressed visitors. One area of the garden that must be mentioned is the burnt oak timber, which was definitely a focal point!

Believe it or not, this is Sturgeon’s eighth Gold win — but what was his mission behind this particular design? Speaking on the creation previously, he said: “I want visitors to think “wow!” when they first see it, then be drawn into the detail and engage with it – to look closely at individual plants and the water in the garden. In fact, they could recreate our use of waterspouts at home, using just one to have water falling into a small pool,”

Those were some of this year’s RHS Chelsea Flower Show highlights, and we can’t wait to celebrate the next in 2020. With summer finally here, it’s time to pay more attention to our beautiful gardens and create an immersive experience that everyone can enjoy!