Statistics show that in the UK, around two to five per cent of school-aged children have attention deficit hyperactivity disorder (ADHD), with 60 per cent of those continuing to display symptoms into their adult life. Symptoms include not being able to control their responses, including paying attention, siting still, and their speech. However, studies have suggested that not enough children are receiving treatment for ADHD, with many children being undertreated.

This raises the issue that maybe not enough of us are aware of ADHD and its symptoms. Many of us are unable to identify the condition and don’t know how to accommodate those with ADHD’s needs to help them excel, with children struggling in school, and as a result, underperforming. It can be very frustrating and overwhelming for a child to feel excluded or not understood, mislabelled as troublemakers or being undisciplined. Click her for more information on understanding ADHD.

To tackle this issue and the stigma and discrimination around ADHD, the Umbrella Project is a neurodiversity charity that celebrates the gifts, talents, and employability of those with neurological conditions such as autism, ADHD, dyslexia, dysgraphia, dyscalculia, and dyspraxia. Have you ever noticed unique shapes such as birdcage umbrellas hanging up and you’ve been unsure why? The Umbrella Project is a movement that is becoming more and more popular around the world each year to help people understand individuals who are neurodiverse. World leading companies like Apple, Microsoft, and IBM actively recruit neurodiverse employees because of their fantastic abilities to innovate, solve creative problems, and analyse information. The Umbrellas Project earned its name because ADHD and autism are ‘umbrella terms’ for a range of neurological differences that challenge the stigma of these disabilities, which are often invisible.

To help the rest of the world become aware of their capabilities, beautiful and colourful rainbow displays of umbrellas are designed and installed on public streets and spaces such as Heathrow Airport and Liverpool city centre. A recent campaign invited schools across the world to have their own display suspended from classroom ceilings so children can understand the unique talents among their peers. It also raises money for the charity — 2018 was so successful that it attracted over 30 million media hits and installations in Dubai, Spain, Argentina, the U.S, Romania, and Czech Republic. 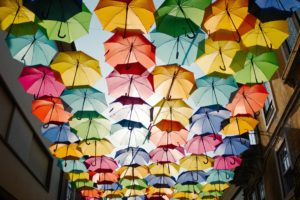 Photo by Ricardo Resende on Unsplash

Businesses can get involved and sponsor an umbrella for £250. Each umbrella is signed and decorated by a neurodiverse child who writes what their ‘superpower’ is on the brolly, whether it’s a talent, gift, or ability, to celebrate their cognitive differences.

This challenges the myths and stereotypes that people may have about children with these disabilities and helps to recognise their contribution to our society and lives.